Aloha Library Friends! Our buildings are still closed, but our Library Book Drops are now open and you can get Library Take Out! You can now pick up holds by appointment. [Read More] Check out Virtual Library Programs!   Listen to a story or learn a new craft. 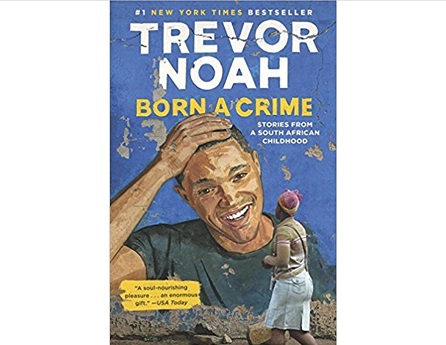 The compelling, inspiring, and comically sublime New York Times bestseller about one man’s coming-of-age, set during the twilight of apartheid and the tumultuous days of freedom that followed.

Born a Crime is the story of a mischievous young boy who grows into a restless young man as he struggles to find himself in a world where he was never supposed to exist. It is also the story of that young man’s relationship with his fearless, rebellious, and fervently religious mother—his teammate, a woman determined to save her son from the cycle of poverty, violence, and abuse that would ultimately threaten her own life.    Source Penguin Random House

Even Bill Gates read Trevor Noah’s memoir ….”Reading Noah’s memoir, Born a Crime,  I quickly learned how Noah’s outsider approach has been honed over a lifetime of never quite fitting in. Born to a black South African mother and a white Swiss father in apartheid South Africa, he entered the world as a biracial child in a country where mixed race relationships were forbidden. Noah was not just a misfit, he was (as the title says) “born a crime.”

All programs are subject to change. If you require an auxiliary aid or accommodation due to a disability, please contact the library at least 7 days before the program date.