Rally and Readings in Honor of Salman Rushdie 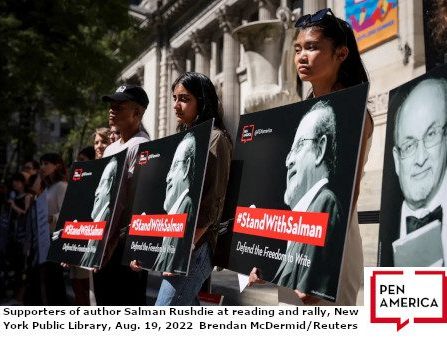 The Hawaii literary community and local advocates of free expression are rallying in solidarity with Salman Rushdie and will hold an outdoor event of readings from Rushdie’s acclaimed works on the steps of the Hawaii State Library on Saturday, October 8th at 1 p.m. The public is invited to come and listen.

Organized by Maui novelist Alexander Maksik in association with PEN America (the free expression advocacy group of which Rushdie served as president), Hawaii Book and Music Festival, the Hawaii State Library, Hawaii Public Radio and University of Hawaii Better Tomorrow Speakers Series, the writers encourage the public to “Stand With Salman: Defend the Freedom to Write.”

Rushdie was stabbed multiple times last month by an assailant who rushed the stage at the Chautauqua Institution in upstate New York. He was scheduled to give a talk about the United States as a safe haven for exiled writers. He has suffered what his son has described as “life-changing” injuries and faces a long recovery.

have for him and their solidarity with his unrelenting belief in the right of writers to create without fear of reprisal.

The celebrated author of The Satanic Verses and Midnight’s Children, and one the great champions of freedom of expression and the freedom to write over the last half century, Salman Rushdie was marked for death and forced into hiding for a decade by Iranian theocrats more than 30 years ago after publication of his novel The Satanic Verses, which centers on references in the Quran. Emerging from seclusion in the early 2000s, he became an advocate for imperiled writers, for free thought and open discourse, and for unfettered intellectual and creative exchange across borders—the central ideas of PEN America’s mission since 1922.

An inherent risk of exposure to COVID-19 exists in any public place where people are present. By visiting and/or participating in library programming, you voluntarily assume all risks related to exposure to COVID-19.  Please help to keep each other healthy.

If you need an auxiliary aid/service or other accommodation due to a disability, please contact the library 7 days prior to the program date.  We will make every attempt to fulfill all requests for accommodations.  All Programs are Subject to change.