Although our buildings are not completely open, there are limited services available. Please check out Library Take Out or Computer Time at the Library.

The Story of the Nisei Soldiers of World War II 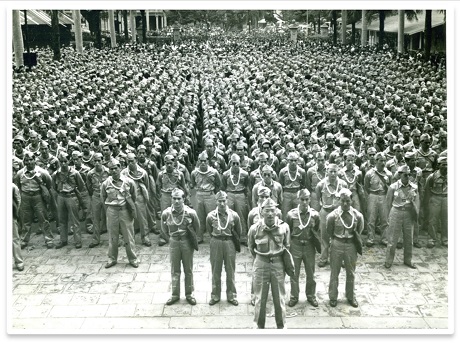 After Japan’s attack on Pearl Harbor on December 7, 1941, Americans of Japanese Ancestry (AJA) were mistrusted and declared, “enemy aliens.”  Despite the suspicion and bigotry, thousands of AJAs from Hawaii and the mainland served honorably in four U.S. Army units.  The 100th Infantry Battalion/442nd Regimental Combat Team is still today the most decorated combat unit of its size and length of service in U.S. Army history.

Come and learn about these AJAs who served gallantly in WWII in spite of the fierce prejudice they faced from their own country.   Learn how they fought on the battlefield and on home ground after the war to champion equal treatment for all people in the islands and Statehood for Hawaii.

This 90-minute event is sponsored by the Nisei Veterans Legacy and is suitable for all ages. This event coincides with the exhibit at Salt Lake-Moanalua Public Library entitled: The Nisei Soldiers of World War II. For more information about the exhibit, click here.

Program schedule is subject to change. Contact the library 10 days in advance to request a sign language interpreter or if special accommodations are needed.

Photo caption: The 442nd RCT at Iolani Palace prior to departure for training camp (March 1943)