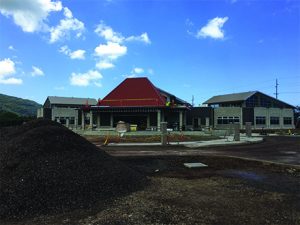 May 2017 Update – Construction is continuing on the new Nanakuli Public Library, and the progress is visible above the dust screens and fencing along Farrington Hwy.  The steel roof framing and decking is almost complete and the finished roofing installation is underway.  Additionally, concrete sidewalks and ramps have been poured, and preparatory work for interior systems is underway. 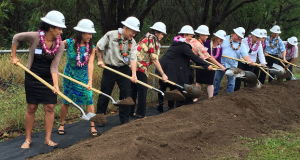 Designed by architect Glenn Miura of CDS International, the $14.8 million library will be built by Watts Constructors, LLC next to Nanaikapono Elementary School.  The 18,000-square-foot library will serve the Nanakuli and Maili communities, including Nanaikapono Elementary and two other nearby schools, and will feature a business center, meeting rooms, and a separate, outdoor program area.

The ceremony featured music by the Nanakuli Hoaloha Singers, brief remarks by Gov. Ige, architect Glenn Miura of CDS international, a $3,000 check presentation for the new library by State Dept. of Agriculture Deputy Director Phyllis Shimabukuro-Geiser on behalf of Norman Oshiro and the Mikilua Farm Center, a message and blessing of the library site by Native Hawaiian Cultural Specialist Shad Kane, and was emceed by State Librarian Stacey Aldrich. 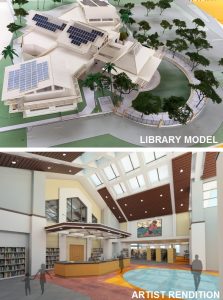 The Nanakuli Public Library will be an environmentally-friendly facility that is expected to achieve LEED Silver Certification or higher, employing green design elements and technologies such as photovoltaics, energy efficient lighting fixtures, various water conservation strategies, utilizing natural lighting and trade winds, and other sustainable technologies. The Library will include: shelves to accommodate up to 35,000 books and 3,000 DVDs and CDs, free wireless Internet access with a valid Hawaii State Public Library System library card, computers for public use and catalogs for locating library books and materials, and ample parking for patrons. The building design is reminiscent of a Hawaiian village setting representing the community’s past and complementing today’s buildings on the Leeward Oahu coastline.

Planning for this library began in 1994 as part of a Program Development Report for Nanaikapono Elementary School.  Design funding became available in 2011 and construction funding was approved in the 2013 Legislative Session.  Community outreach and programming began in June 2012 with the intent of designing the library to meet the local communities’ needs.  In 2013, HSPLS, with the support of community leaders and legislators, secured legislation (Act 134, SLH 2013) for $15.5 million in land acquisition funds.  Former Gov. Neil Abercrombie released these funds for the new Nanakuli Public Library site on April 8, 2014.